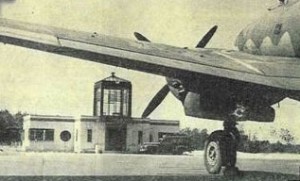 “In 1937, this art deco terminal was a bold architectural statement for rural New Hampshire. Built as one of the Works Progress Administration (WPA) projects that sprinkled New Hampshire with unique, useful structures and employed hundreds of Granite State residents, the 1937 airport terminal continued in service until the expansion of Manchester Airport in 1995 slated it for demolition…

In 2004, the New Hampshire Aviation Historical Society, Manchester Airport, the City of Manchester and Town of Londonderry, came together to preserve The 1937 Terminal. These groups raised 1.1 million dollars to convert the facility into a museum and educational center and is today the The Aviation Museum of New Hampshire.”   (www.nhahs.org)