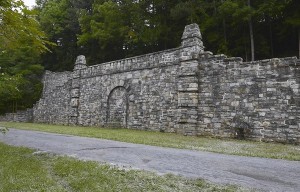 Lehigh Parkway is a large public park along the Little Lehigh River in Allentown. Along with much of the rest of Allentown’s park system, Lehigh was developed largely by the WPA.

“The stone wall in Lehigh Parkway may be the most recognizable relic. Under the WPA, the 700-foot-long wall was built to support the road that runs above it. At its highest point, two decorative turrets frame a staircase that allows people to reach the park from the road.”   (http://articles.mcall.com)

The WPA also built a boat landing and other structures in Lehigh Parkway.