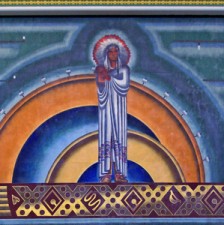 A 43′ x 20′ oil mural was painted on the steel fire curtain in the auditorium at Lane Tech High School by artist John Edwin Walley. It was installed in 1936 with funding from the WPA’s Federal Art Project and restored in 1997.

One commentary on the mural says this:

“The imposing Native American figure called “the lean Indian,” painted on the steel fire curtain of the school auditorium, was the first of many artworks to be commissioned for Lane Tech, then all male, during the New Deal years. The school had moved to a new building in 1934, and Lane’s principal was eager to have new works of art. He eventually assembled the largest public school collection of WPA art in the city. Together with a supervisor and an artist, who were sent to the school from the local WPA office, the principal would determine the subject, medium, and nature of each project…”

“John Walley’s first proposal for the fire curtain, depictions of hunting and ceremonial scenes he remembered from his Wyoming childhood, was rejected by the principal, who said it was ‘too exciting, and it would make the boys crazy.’ Walley would have liked to back out, but instead he fulfilled the principal’s request for something more ‘static,’ inspired by sculptor Lorado Taft’s colossal statue Black Hawk in Oregon, Illinois. Walley was concerned about the large scale of the figure, fearful that for students ‘in the first twenty rows, all they’ll see is knees. But that’s what [the principal] wanted and that’s what I did.’ As WPA project supervisor for the school, Walley said that he ‘opened up Lane for the other artists.’

The figure on the curtain disappeared from sight in the 1970s, …when a psychedelic pattern was applied to the curtain. Only through the efforts of Flora Doody, a dedicated and determined Lane teacher who initiated a restoration program in 1995, was the psychedelic layer painstakingly removed by a professional conservator and the mural restored to its original condition. The work took nearly two years. The composition also includes symbols and patterns used by the Crow Indians. These symbols describe the journey of the student through Lane as he develops ‘wisdom and a watchful eye’ and eventually ’embark[s] on another path to reap the harvest and plenty of life.'”