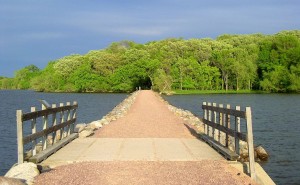 The Wikipedia page for Lake Shetek State Park, indicates that both the FERA and the WPA played instrumental roles in the early development of the park, including roads, sewers, and the construction of several structures, some of which are still in the park today. From the Murray County website:

Much of the early development and construction of park facilities was done by Works Progress Administration (WPA) workers. The workers were part of a WPA Camp which was located on Keeley Island, across the lake to the west, from 1934 to 1940. The camp employed 200 transient and homeless men. Initially operated by the State Emergency Relief Administration, the camp was one of 32 that existed in Minnesota. The area of Shetek Lutheran Bible Camp on Keeley Island was at one time part of the State Park. WPA workers constructed buildings in the park and at the Bible Camp location, and also several causeways, including the causeway that leads to Loon Island. With an increased availability of jobs and the outbreak of World War II, the WPA dissolved. Construction of the final causeway, or dike, which was to connect Loon and Keeley Islands was abandoned , and the Keeley Island property was no longer part of Lake Shetek Sate Park.

Several park buildings and facilities are on the list of The National Park Service’s National Register of Historic Places. They include the the Beach House, built in 1939-40, which features finely executed stonework incorporated into a series of stairways, terraces, and retaining walls. The Beach House and adjoining beach is easily seen from a long distance and is considered a landmark. In 1960, the concession counter was removed and a door and windows were added. In 1964, an addition was made to the rear of the structure which changed the building to a T-shaped configuration.

The 1000 foot long Causeway that leads from the boat landing to Loon Island is also included on the List of Historical Places by the NPS. It was built in 1938 with boulders, fieldstone, and gravel from the shoreline of Lake Shetek and from nearby farm fields.

Location notes: Site is north of Currie on County Road 38.