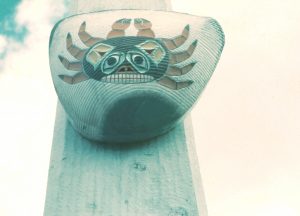 The Civilian Conservation Corps (CCC) restored/recarved the Giant Clam Pole between 1938 and 1940. The restoration was part of a larger U.S. Forest Service program focused on the conservation of totems and Native cultural assets. The pole was originally found at the abandoned village of Tuxekan. With the accord of the former residents, the CCC and the U.S. Forrest Service relocated the pole to the Klawock Totem Park on the Prince of Wales Island.

In their 1961 volume, The Wolf and the Raven, anthropologist Viola Garfield and architect Linn Forrest note that the Giant Clam Pole belonged to a member of the Raven clan. The totem illustrates Raven’s attempt to destroy a monster.  Garfield and Forrest describe the symbolic meaning illustrated by the figures of the pole:

“On top of the pole in Klawak Park is Raven, carved as a hat or headdress worn by his slave. In the slave’s hands is the club with which he was supposed to kill the monster clam. On the original pole the slave’s hands rested on his knees, and a gun was placed in his lap. The carvers agreed that the incident commemorated on the pole took place long before the Tlingit had guns, so they provided the slave with the ancient weapon when they copied the column. They also added the clam and the small white crab, often found in empty shells on the beach. Tales of giant bivalves that sucked down canoes or caught unwary individuals and held them until they drowned are fairly common in Tlingit literature. The locale of this particular story was a town on Baker Island where the ancestors of the present owners once lived.”