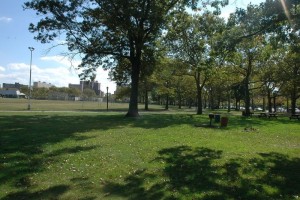 NYC Parks describes the history of this park: “The property on which the park is located was acquired by Parks from the Sinking Fund in two parcels. The first parcel was assigned on July 11, 1934, the second on June 23, 1937. Kaiser Park was formerly known as the Coney Island Lots because the northwestern corner of the park is situated on Coney Island.”

A Department of Parks press release from November 1936 announced the completion of new facilities at the site, including “a wading pool 54′ x 96′, two hard ball diamonds for older boys and see-saws, swings, jungle gym, slides and playhouses for younger children.”