National Archives Record Group 135-SAR: Prints: Photographs rejected for use in the Photographic Report to the President: “Survey of the Architecture of Completed Projects of the PWA, 1939”; Box 23: Federal Folder.

The Julia C. Lathrop Homes was one of the first federally funded public housing projects in Chicago, providing inexpensive housing to those who otherwise could not afford it. The project was an immediate success, as evident by the overwhelming amount of applications submitted in 1937, a year before the homes were completed. 2,383 families applied to live in the Lathrop Homes, which would only have 975 units total. These applications were narrowed down based on income; only those who made less than five times the amount of rent were considered.

In 1939, the average monthly rent for Lathrop Homes was $5.39 per room. Including utilities, this number jumped to $7.25 a room. The whole project cost the PWA approximately $5,556,900, including land and construction costs.

These days, the Lathrop Homes are praised for their ethnically diverse community. However, in 1953, there was some controversy when it came out that Wayne McMillen, chairman of the Chicago Housing Authority, had been instructing staff not to place African-American families in certain homes, including Lathrop. This went against the CHA’s non-discrimination policies. At the time, the Lathrop Homes were primarily occupied by white and Puerto Rican families.

From 2006 to 2012, there was much debate about whether to preserve the Lathrop Homes or to tear them down. Preservation Chicago advocated for the Lathrop Homes, placing them on their “Chicago’s Seven Most Threatened Buildings” list in 2007 and 2013. They proposed that instead of replacing the Lathrop Homes with an “apartment-condominium-townhome development,” the homes remain a place for the low to moderate income community and that any changes done to the buildings stay respectful to the vision of the original architects. In 2012, the Homes were placed on the National Register of Historic Places and are currently going undergoing restoration.

Short and Brown’s 1939 survey of PWA projects describes the homes in detail:

“The 35 acres of land purchased for this project cost $599,989, which is equivalent to 39 cents a square foot. Many of the streets which serve the project are ‘dead end’ streets and may be safely used for playground areas.

The structures are fireproof and consist of a series of 3-story apartment buildings and 2-story row houses which cover 19 percent of the site area and contain 94 rooms to the acre. The 925 family-dwelling units are arranged so that 5 percent are 2-room, 46 percent 3-room, 42 percent 4-room, and 7 percent 5-room apartments, with a total of 3,313 rooms in the development.

The monthly shelter rent averages $5.39 per room. The actual total rent, which includes all charges for heat, hot and cold water, electricity for light and refrigeration, and gas for cooking, averages $7.25 a room per month. The first group of tenants moved in on February 1, 1938. 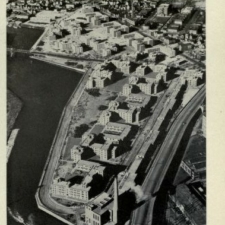