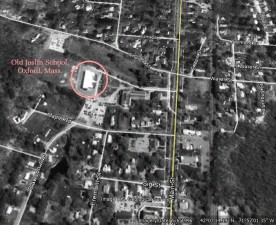 The school was demolished between 2006 and 2007; outdoor basketball courts now occupy the site.