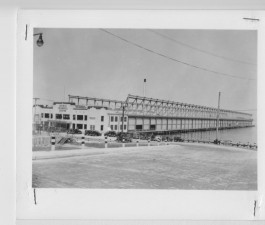 “Joseph H. Lyons Pool, the largest public pool on Staten Island, was built in 1936. Constructed by the Works Progress Administration (WPA), the Lyons Pool was one of eleven pools that opened throughout New York City in a single summer during the Great Depression.” (NYC Parks)

“Opened July 7, 1936, Mayor Fiorello LaGuardia summed up one of the main goals of the WPA pools, calling the facility “a monument to the progressive government which would not and could not see unemployed men on the breadline.” (NYC Parks – Pools history)

The year of the pool’s opening – 1936 – became known in New York as “swimming pool year,’ since ten of…the eleven pools were opened that summer, one per week for ten weeks.” The pool was the fourth WPA pool to open in New York City that summer and the only one to open on Staten Island (LPC).

At the time of its construction it was referred to as Tomkinsville Pool because it was built on the site of Tomkins Park and Playground, that was itself named after the surrounding community. The community’s name came from the its founder, prominent New York politician Daniel D. Tomkins (1774-1825). The pool was later renamed for World War I veteran Joseph H. Lyons (1874-1934).

The New York City Landmarks Preservation Commission (LPC) tells us that choice to locate the pool at the particular site had to do with  “..its close proximity to public transportation and an existing Parks project…where WPA-funded work had recently begun converting the pier (pier 6) into the George Cromwell Recreation Center” (LPC). The recreation center is now demolished, but Lyons pool remains.

The Parks Department describes its facilities: “The main pool measures 165 feet long and 100 feet wide, while both the wading and diving pools are 100 feet by 68 feet. The pool is designed to accommodate 2,800 bathers at a time; during the first summer, crowds averaged 5,707 people each day.”

LPC lists Joseph L. Hautman and an “army of architects, draftsmen, engineers, and landscape architects employed by the Parks Department in the 1930s,” as the lead architects, and Aymar Embury II as the consulting architect (LPC).