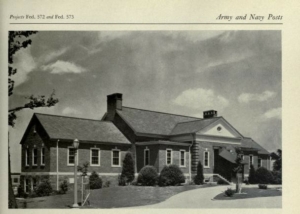 New Deal agencies were busy at the two older facilities, making improvements of various kinds.  In 1933-34, the Public Works Administration (PWA) provided the funding for officers’ homes and the officers’ mess at Bolling Field.

Short and Stanley-Brown describe PWA work on the site:

“One of the construction projects undertaken by the Quartermaster Corps of the Army consisted of a group of houses at Bolling Field to accommodate 2 field officers and 11 company officers and their families and also an officers’ mess. The houses are all similar and include living room, dining room, kitchen, maid’s room, 4 bedrooms, and baths. The officers’ mess contains an office, kitchen, pantries, officers’ mess room, a lounge, a dormitory, and 5 bedrooms. The houses are brick with wood trim and slate roofs. The mess hall is stone ashlar to the first floor level, brick with stone trim above, and has a slate roof. The houses were completed in October 1934 at a project cost of $148,000. The mess hall was completed at the same time at a project cost of $54,951.”

Current status of these buildings is unknown.