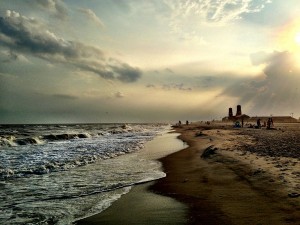 “260-acre Riis Park, stretching over a mile on the western section of the Rockaway Peninsula, was acquired by the city in 1913. In 1914, the beach was named for Danish-born photo journalist and social reformer Jacob August Riis, once a Queens resident. The original bathing pavilion was built in 1932 and could handle up to 8,000 users. In 1934, Commissioner Moses announced plans to upgrade Riis Park with a $1.7 million investment, including a new bathing pavilion, parking field, pitch-‘n-put golf course, and a 40–foot wide mile–long boardwalk. The bathhouse was designed by Parks´ chief architect Aymar Embury II whose team used an economical style of simple structural planes and a palette of materials like brick, limestone, and granite.

If the turn of the century amusement parks catered to a more hedonistic element, the facilities built in the 1930s were focused on health and betterment. Jungle gyms were a standard feature of the several hundred playgrounds built by the Parks Department in the 1930s, and as part of the comprehensive program to overhaul the city’s beaches, adjacent recreation facilities were installed for children and adults. Rather than simply vegetate on the beach, visitors were encouraged to stretch and build muscle tone each day at 11:00 a.m., 2:00 p.m. and 4:00 p.m., in group calisthenics led by Parks recreational department supervisors.”  History of City-Owned Beaches

While the above history does not mention it, much of the rest of the park was constructed with the help of the federal New Deal, by  Works Progress Administration (WPA) workers under the guidance of New York City’s Department of Parks and it director, Robert Moses.  Parks Department press releases from June 1936 explicitly note the use of relief labor in constructing a new sea wall, promenade, and the concrete parking field. A photograph from the National Archives credits the WPA with the Concessionaire’s Building.  Even where no specific agency is noted, researcher Frank da Cruz explains here that almost all New York City Parks Department projects from 1934-1943 were accomplished with New Deal funds and/or labor.

The striking bathhouse was originally constructed in 1932, when Franklin Roosevelt was Governor of New York.  Shortly before the expanded park opened in 1937, the Parks Department announced that, “The existing bathhouse has been enlarged to provide facilities for 10,000 persons and there will be parking facilities for 14,000 automobiles in the largest single unit paved parking space in the United States.”

During New York’s fiscal crisis in the 1970s, Jacob Riis Park was one of several parks to be transferred from City to Federal jurisdiction, becoming part of the Gateway National Recreation Area.  Nevertheless, the beautiful Art Deco bathhouse has suffered neglect.  As the New York Times reported in 2012:

“With its octagonal brick towers rising above the beach, the sprawling bathhouse at Jacob Riis Park in the Rockaways has, since opening in 1932, served as a monument to Art Deco design, grand public works and populist fun. Lately, however, it has become a symbol of something else: public frustration.

Renovation work began in the 1990s on the bathhouse, which is part of the federal Gateway National Recreation Area. Nearly $20 million was spent on asbestos removal, electrical upgrades, window replacements, new elevators and facade work. Politicians predicted that the bathhouse would be a fitting centerpiece of Jacob Riis Park, which is nicknamed the People’s Beach, while beachgoers envisioned cafes and souvenir shops, hot showers and community space.

But the work was never finished, and today the 40,000-square-foot bathhouse appears all but abandoned. Its large oceanfront bays are boarded up with plywood; its giant courtyard houses piles of sand, weeds and several derelict lifeguard stands, two of them toppled over….

Officials of Gateway, which is part of the National Park Service, say that the bathhouse suffered a one-two punch. First, the money meant for the restoration did not go as far as they had planned. The bathhouse complex actually comprises four buildings; while the entry pavilion on the inland side is finished, the beach pavilion still needs major work. Then came Tropical Storm Irene, which smashed a series of large doors protecting the interior — the ones now covered in plywood — and dumped four feet of sand on the ground floor.”   NY Times, August 21, 2012 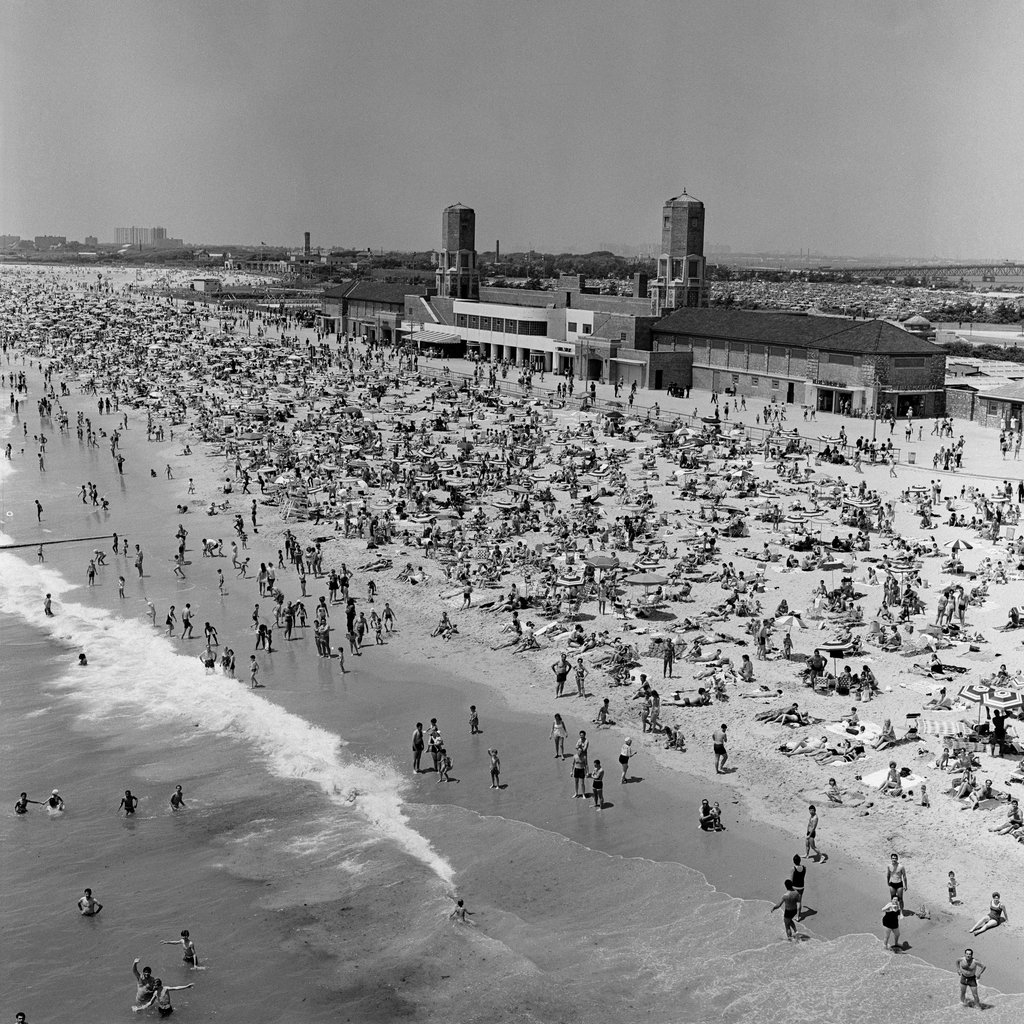 Caption reads: The WPA constructed the concessionaire building under the sponsorship of the Department of Parks, NYC. (National Archives and Records Administration, Negative 13074-C)