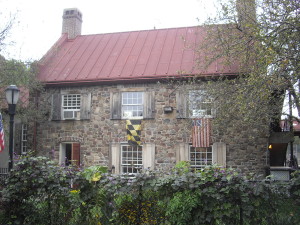 Now known as the J. J. Byrne Playground, this was one of five “model playgrounds” designed as templates for further playground development by Robert Moses and his team after Moses assumed control of the New York City Parks Department in 1934. J. J. Byrne Playground is located within Washington Park in Brooklyn. When it opened in August 1934, the playground contained handball courts, two “bo-uijo courts,” and a wading pool and play area for small children. It also contained a unique recreation building now known as the the Old Stone House of Gowanus.

The NYC Parks website describes the structure as “the reconstruction of the Vechte-Cortelyou house, originally built by Claes Arents Vechte in 1699. Though the building was demolished around 1897, its foundations were rediscovered in 1930, at which time Borough President Byrne ordered its reconstruction from the original brick. It was completed in 1934 as a park office and comfort station.” The 1934 press release announcing the opening of the playground as a whole also described the construction of this building: “the recreation building is an adaptation of the old Cortelyou house which formerly stood on this site. It is being built in part from the stone salvaged from the old house at Gowanus, the foundations of which were uncovered by Park Department Emergency Relief workers last summer. The play room is designed in a manner to represent typical Early Dutch Colonial Interior Architecture.”

All the labor and materials for the playground’s 1934 construction were supplied by Work Relief funds. Given the early date, this most likely included CWA funds, as researcher Frank da Cruz explains here. This was one of the first in what would eventually be 370 new playgrounds in New York constructed by New Deal agencies.