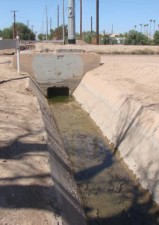 “The Bureau of Reclamation utilized the manpower of two Civilian Conservation Corps camps, BR13A and BR74A, to create a system of irrigation canals for the farming community of Yuma. Between 1939 and 1941 enrollees cleared 59 miles of right-of-way, constructed canals, laterals, and headgates, and performed rodent control and landscaping. Today Ferguson Lateral is a tangible example of CCC work that still enables water managers to direct water. Although the farms have moved to the outskirts of Yuma, the canals, laterals, and headgates remain. Homeowners may still access the laterals to water their yards. The canals are stocked with fish to control algae. With a fishing permit you may join locals catching fish in Yuma’s New Deal irrigation system.”