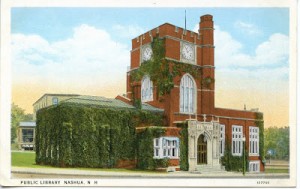 An old illustration of the library

This building was originally built as a public library in 1903. During the 1930s, New Deal workers significantly improved the building. In 1970, the library moved to Court Street. The Hunt Memorial Building then housed the offices of the Nashua School Department until 1991. Since renovations in 2011, the building has been rented for events.

Municipal reports from the 1930s detail New Deal work on the site:

In his town summary of 1934, Mayor Lucier wrote:
“This has been a year of much needed repairs both inside and outside the building. Here, again, federal aid stepped in and grateful thanks are due the Mayor and House Committee for their influence and help in getting the projects through… After the carpenters finished, the C. W. A. workers painted the new ceilings, the walls of the staff room, the dirty and dingy lower hall, both toilets, the newspaper room, typewriting room and some patching was done in the Trustees’ room.”

In 1937 the Library Commission wrote:
“The long promised renovation of the library building by the WPA was begun in October. The woodwork on the outside has been painted, the dead vines removed and the stone and brickwork cleaned. Most of the walls on the inside have been cleaned thoroughly and painting started. From present indications spring will not be far away when the work is completed. Although it was expected that confusion and some inconvenience would be caused by this repair work, the public in general have been disturbed very little and the library doors have been open every day as usual. The painters have been most cooperative and very careful not to cause any unnecessary disturbance.”

In 1938 the Library Commission wrote:
“Early in January the W. P. A. painters redecorated the walls of the Reading Room, changing the color from dark blue which had been used since the building was erected, to a warm shade of buff. Although there was some doubt about the advisability of the change it has lightened the room considerably and has not lessened the artistic value to any great extent. The lighting fixtures on the tables and the wall brackets were removed and refinished by Johnson’s Electric Shop, making an added improvement in the looks of the room. The remainder of the painting was finished by the first of March with most satisfactory results and included the walls and ceilings in the children’s room, staff room, the walls in the lower stacks and first floor.”