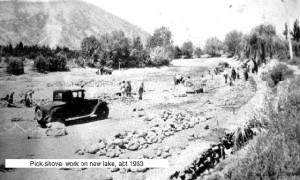 Kern County  bought 338 acres of the old Baker Ranch in 1921 to create Kern River Park. After 1927, John Oliver Hart took charge of improvements to the park.  The most important developments at the park occurred under federal funding in the 1930s.  As Gilbert says:

“Park projects that were paid by county taxes from 1921 to 1930 were insignificant compared to funding from the US Government’s make-work programs of the Thirties, and those improvements have not been equaled since. By 1935 the State Emergency Relief Administration had spent about $250,000 on Kern River Park, or the equivalent of about $3.6M today.

The park’s proposed 35-acre lake was the greatest project. Planning in summer 1930 secured the water rights from Miller & Lux and the Kern County Land Company, and construction of the lake started in 1934. During excavation the size was scaled back to 16 acres, but the water rights to 35 acres was never changed.

Local laborers pushing wheelbarrows, swinging picks and pushing shovels were paid a dollar a day to dig the lake and its 212-feet supply channel. Workers also constructed an eight-feet-high, arched, masonry culvert; a reinforced concrete, 30-feet spillway; and an arched, masonry main bridge, all of which remain today.

Built, too, were five timber bridges “of various design” to connect the “mainland to the island” –which was Goat Island. West of the big lake workers installed a 200 x 400-feet parking lot and a 100 x 400-feet lily pond. The pond is in use today. By the mid-1930s, 188,000 man-hours had been devoted to park development. The west entrance gateway, built in 1941, was [the] last Depression-era structure built.”

The lake in the park is now only three acres with water about five feet deep.