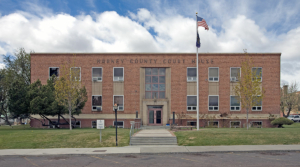 This structure was constructed with WPA help, but did not receive sought-for PWA funding:

“Forty years later, the November 4, 1938 Burns Times-Herald called the courthouse “antiquated [and] poorly arranged.” Voters were deciding whether the county should construct a new $100,000 courthouse, with 45 percent of the cost to be paid by the federal Public Works Administration (PWA). With such largess, the issue passed, and the county judge immediately traveled to Portland to present a request to the PWA official. But the PWA refused the request; later newspaper accounts blamed either incomplete plans or that the county’s part of the funding was not entirely available in 1938.

By 1940, the court began discussing building a modest courthouse entirely with its own funds. Officials and interested leading citizens toured recently constructed courthouses in Tillamook, Linn and Deschutes Counties. Economy, however, was foremost in their minds. The court even reduced the amount of the lowest construction bid by about 5 thousand dollars to $63,066. The county moved to the Brown building and, assisted by a grant of over four thousand dollars from the Works Progress Administration, work began on excavating a basement.

Just one month after the invasion of Pearl Harbor, the county court moved into the courthouse, and the community began using the new facilities…

Because Harney County did not receive the PWA funds to help build its new courthouse, the building does not feature a lobby with costly marble wainscot or elaborate ornamentation on the exterior like the courthouses in Linn and Clackamas counties, which did received PWA funding. The Harney County courthouse is a plain structure, but through the years its citizens have personalized the building with things that speak of the community. Just like their predecessors at the turn of the century, Harney County citizens are aware that the courthouse represents them.”   (www.co.harney.or.us)