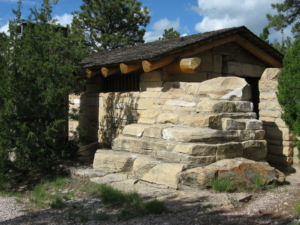 Guernsey State Park is built around the Guernsey Dam and Reservoir, constructed in the 1920s as a U.S. Bureau of Reclamation project along the North Platte River in  southeastern Wyoming. In the 1930s, the Bureau worked with the National Park Service and the Civilian Conservation Corps (CCC) to develop the area around the reservoir as a recreational park. The land is owned by the Bureau and managed by the state of Wyoming.

The CCC developed the park’s recreational facilities from 1934 to 1937, working out of two camps: Camp BR-9, on a bluff north of Guernsey Dam, and Camp BR-10, about a mile west of the dam.  A garage and shop building are all that remain at the site of BR-9, now a storage yard for the park. A powder storage magazine remains at the site of BR-10.

CCC enrollees “set about constructing what became a showplace of state park design. They built roads, including Lakeshore Drive and Skyline Drive, where winding steps still lead to The Castle – an overlook offering a spectacular view of the lake. They built bridges, picnic shelters, water fountains, trails and a museum on the summit of a hill.” (NPS 2014)  They built several other roads, 8 miles of trails, a handful of road and foot bridges, picnic tables and fireplaces, and privvies, as well as doing landscaping, fire fighting and other miscellaneous work.

The Guerney Park Museum, the largest structure, is perched on a cliff overlooking the lake.  It is made of sandstone blocks, with a roof held up by hand-hewn timbers and hand-forged iron and covered with split cedar shakes. The floors are made of smooth flagstone.

There are three CCC picnic shelters, the largest of which is known as “the Castle”.  It has a giant stone fireplace and winding steps that lead to an observation area for a spectacular view over the park.

A favorite structure is the massive stone “comfort station” popularly called “the million-dollar biffy”.  The stone buttresses on the outside look like they could withstand a major tornado and huge timbers frame the stalls inside.

Lake Guernsey State Park is a National Historic Landmark District. Pfaff (2007) calls the park, “the most important early example of recreational development around a Reclamation reservoir in the West.”

Nearby, at the disused site of Island State Park are fish-rearing ponds built by the CCC working from Guernsey State Park. 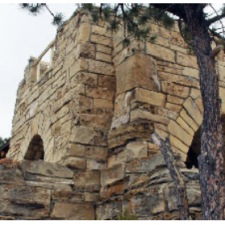 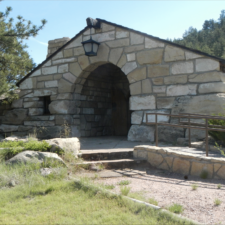 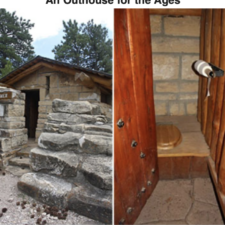 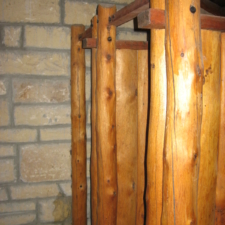 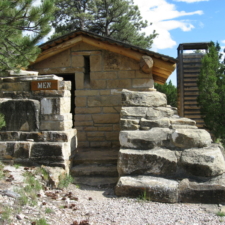