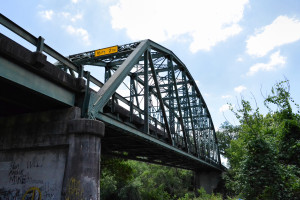 The Guadalupe River bridge was built to replace a truss bridge built by DeWitt county in 1887 because the bridge suffered a “light load capacity and inadequate roadway width.” Planning for the new bridge began with two preliminary site inspections by the Texas Highway Department (THD) conducted on July 15 and November 12, 1936, with the participation of United States Bureau of Public Roads (BPR) engineers. Rather than use a standard design, THD bridge engineers specially designed the bridge’s riveted Parker truss span. The cost estimate was $310,700.

THD submitted the estimate and the BPR approved it and appropriated 1937 Regular Federal Aid funds to cover the customary 50 percent of the estimated total project cost, or $155,350. The project consisted of the construction of the Guadalupe River bridge and relief structure, as well as about a mile of approach roadway grading. The commission awarded the bridge construction contract to Cage Brothers & L.A. Turner of Bishop, Texas. Construction began on April 1, 1937. Works Progress Administration laborers assisted in building the relief bridge. The project was completed on February 24, 1938, under budget and ahead of schedule, at a cost of just over $257,000.

The two lane bridge currently carries three highway routes; US 87, US 183 and State Highway (SH) 72 across the Guadalupe River. The bridge links Cuero with Goliad to the south and San Antonio to the west.