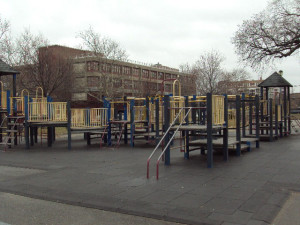 One of these five playgrounds was Grace Playground. The playground has since been expanded, most recently in 1994.

Although the 1937 press release does not mention which New Deal agencies were involved, researcher Frank da Cruz explains here that almost all New York City Parks Department projects between 1934 and 1943 were carried out with New Deal funds and/or labor, and that after April 1935, the WPA quickly became the main source of this support.