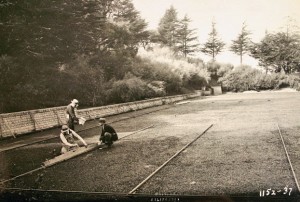 Work Project #1152 Buena Vista Park Tennis Courts [misidentified] New Tennis Courts such as these under process of construction in Golden Gate Park are being built in all parts of the City, so that our Helen Wills, Helen Jacobs and Alice Marbles may have the opportunity to develop their promise. United States. Work Projects Administration (Calif.) Works Progress Administration, District no. 7, San Francisco: Construction and Engineering Projects. [San Francisco, Calif.? : s.n. ; 193-?] University of California, Berkeley, Doe/Moffitt Libraries, TA25.S35 U6

Construction of tennis courts in Golden Gate Park and at 38th Ave. and Fulton Street.–Mooser, p. 87.

note–this reference is both to the Tennis Courts at the South East end of Golden Gate Park and to a separate set of courts north of the park on 38th, the latter being most likely what are now basketball courts at Cabrillo Playground.