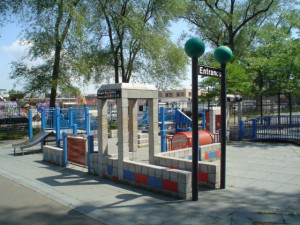 A March 27, 1936 Department of Parks press release announced the opening of this new WPA playground:

“The Department of Parks will open ten new playgrounds Saturday, March 28, making a total of 125 added to the recreational system in two years.

All of these playgrounds were constructed as Works Progress Administration projects.”

In July of the same year, Parks announced the further completion of “a large game area, a wading pool and complete apparatus for children” and benches “placed around the edges of the playground under shade trees for the use of mothers and nurses.”

The park was originally the McKibben Park. It was renovated in 1999 and re-0pened as  Gilbert Ramírez Park.