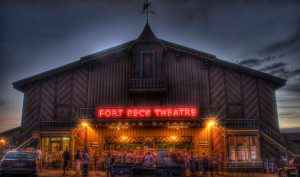 When President Roosevelt authorized the Works Progress Administration construction of the Fort Peck Dam in 1933, the “instant” town with a population of 10,000 created a need for social and recreational diversions in this remote area of Montana. The Army Corps of Engineers designed and constructed this theatre in less than nine months at a cost of nearly $90,000. The theatre opened November 16, 1934, as a movie house. Seating capacity was 1,200 and continuous showings ran twenty-four hours a day, seven days a week during the construction of the Fort Peck Dam. Patrons sometimes braved lines as long as seven blocks to see the newest films for a forty-cent floor or thirty-cent balcony seat. The theatre’s function as a movie house ceased in 1968, but its original carbon arc projectors remain in operable condition. The cut-out balustrades, false balconies, champhered beams, and herringbone-patterned siding of this Swiss chalet style structure reveal careful attention to artistic detail that is unsurpassed in WPA construction in Montana. The Fort Peck Theatre now houses the largest professional theatre company in eastern Montana and is a cultural treasure serving almost eight thousand theatre-goers during the summer months.