“The Fort Peck Dam on the Missouri River in northeastern Montana, approximately 20 miles southeast of Glasgow and near the town of Fort Peck, is being constructed by the Army Engineers under the supervision of the District Engineer.

The primary purpose of the project is to improve navigation on the river below Sioux City, Iowa, to its junction with the Mississippi, a distance of 764 miles. Secondary and resulting purposes are flood control, prevention of bank erosion, hydroelectric power, and irrigation. In addition, the project was undertaken at a time when it was imperative to provide-work for the unemployed and 47,000,000 man-hours of work were expended on the project up to July 1, 1938.

The maximum height of the dam will be 250.5 feet and its length between bluffs will be about 2 miles with an additional section about 2 miles in length extending along the west bank of the river. The maximum width of the base is 3,150 feet and the top, on which there will be an asphalt-paved road, will be 50 feet. The dam will contain 109,000,000 cubic yards of rock. The reservoir created will have a surface area of 245,000 acres, a length of 189 miles, a width of 16 miles, and a shore line 1,600 miles in length.

Construction of the earth dam is being carried on by the hydraulic-fill method, employing four electrically operated dredging units. Essentially it consists of two previous sand shells with a dense, relatively impervious ‘core’ of fine material between them. Up to July 1, 1938, 95,000,000 yards of earth had been placed, and it is estimated that the entire project should be completed by the end of 1939.

The spillway of the Fort Peck Dam has been constructed on an arm of the reservoir, about 3 miles east of the earth dam. It is designed to discharge a maximum of 250,000 cubic feet of water per second, and this capacity, together with tunnels built in connection with the earth dam, will protect the dam against a maximum estimated flood.

The spillway consists of a wide approach channel, a concrete gate structure mounting 16 vertical lift gates each 25 feet high and 40 feet wide, a concrete-lined channel a mile in length at the end of which is a concrete cut-off structure, and an unlined stilling section from which the discharged water will return to the Missouri River at a point approximately 8 miles below the dam.

“Fort Peck was a major project of the Public Works Administration, part of the New Deal. Construction of Fort Peck Dam started in 1933, and at its peak in July 1936 employed 10,546 workers. The dam, named for a 19th-century trading post, was completed in 1940, and began generating electricity in July 1943. The town of Fort Peck, Montana, “the government town,” was built for Army Corps of Engineers personnel and men in “positions of responsibility” and their families during the dam’s construction. Many of the facilities that supported the dam’s workers are still utilized today, such as the recreation center and the theater. In addition to Fort Peck, other towns sprang up to house the workers. Among these were Wheeler and McCone City as well as more than a dozen others. Many of the homes were later moved to farms and towns around Montana.”
(Wikipedia) 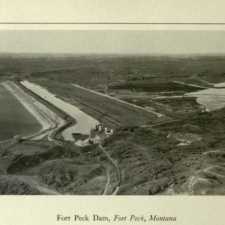 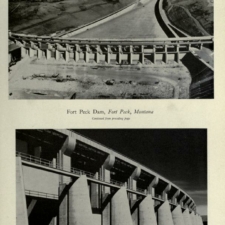