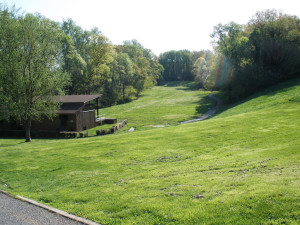 From a HABS Survey Report on CCC involvement in the park’s development:

“This park is located on the east side of the Anacostia River just to the south of East Capitol Street in Southeast Washington.  The initial, roughly sixteen-acre land purchase encompassing the original section of Fort Dupont Park, including the fort, occurred in 1916.   In 1933, the site came under the purview of the NPS and they quickly advanced existing plans to enlarge the park.  They envisioned ‘that the ultimate development of Fort Dupont will be somewhat similar to Rock Creek Park’ and ‘will serve the large population of Northeast and Southeast Washington.’  Late in 1933, Camp NP-7-DC (Benning/Fort Dupont) began cleaning up and preparing the site in anticipation of starting ‘construction of certain physical improvements that will make the park accessible to the public.’  August 1935 found work proceeding quickly toward the ‘creation of the proposed pleasure park’ and by March 1936, the enrollees had completed most of the work on the picnic grounds, the table-and-bench combinations, drinking fountains, and parking areas; the foot trails, guard rails, and stone fireplaces were well underway.  One year later, they built a playing field and a comfort station.

A CCC-era map of the park completed sometime after 1937 depicts forty ‘table units’ organized into two groupings called the ‘Ridge Picnic Area’ and the ‘Pinewoods Picnic Area.’  These areas were both positioned near the intersection of the two roadways extending through the park.  One curved north-to-south from Ridge Road on the park’s northern boundary to a proposed extension of Massachusetts Avenue along the southern boundary (present Fort Davis Drive).  The other, entered from Minnesota Avenue at the park’s southwestern corner, arced to the northeast before it headed in a more-or-less eastern route until it intersected the other roadway (present Fort Dupont Drive).  The playfield was located at this intersection. The Pinewoods Picnic Area sat to the east across the north-south road, and included: a small access road with turn-around, ten table units, a ‘council ring,’ and a comfort station.  Positioned to the south of the east-west artery, and west of the north-south artery, the Ridge Picnic Area contained considerably more table units (thirty) and its own subsidiary access drive, but no other amenities.  The easternmost third of the park was criss-crossed with bridle paths.  The CCC structures comprising Camp NP-7-DC stood in its northwest corner with its own access road extending eastward from the intersection of E Street SE and Minnesota Avenue.

The 1930s map also depicts another park road entrance situated at the end of a southward extension of the north-south roadway below Massachusetts Avenue roughly one-half a mile to Pennsylvania Avenue.  The work was completed under the CCC heading of ‘Fort Drive, Reservation 518,’ which refers to a narrow spur of parkland (now part of Stanton Park) containing this section of the roadway.  ‘General cleanup’ for this reservation occurred between October 1934 and April 1935, shown completed in an October 1935 photograph apparently taken before cutting and grading of the roadway was started.   The roadway extension through this reservation retains the road name ‘Fort Davis Drive.’

In creating the park landscape, the CCC built fifty-three stone fireplaces of two different designs, both with inset iron grilles, fifteen drinking fountains of the ‘rustic log type with bubblers and faucet,’ seventy-nine log table-and-bench combinations, and thirty signs. The enrollees also created parking areas along two miles of roadway in the picnic areas, three-and-one-half miles of foot trails, a 50′ x 6′ stone retaining wall at the comfort station in the Pinewoods picnic area, sewage and water lines, as well as landscaping activities that included general cleanup, razing of ‘undesirable structures,’ grading, seeding, sodding, planting, and ‘selective cutting for effect.’ The report records enrollees from Camp NP-14-DC (1938-1942) and Camp NP (D)-l (1942) working on the development of a golf course at Fort Dupont.

The 2004 fieldwork found that the essential character of Fort Dupont Park as created by the CCC stands largely intact.  A comparison of present and historic maps show that the existing and proposed 1930s roadways and boundaries survive more-or-less unchanged.  The only significant alteration is the absence of a spur of the east-west road, planned to cross over Minnesota Avenue and ultimately connect through to Anacostia Park along the river a few blocks to the west.  If this spur was an extant feature on the 1930s map, then it likely disappeared with the subsequent construction of the Anacostia Freeway.

The Ridge Picnic area is essentially in place, including the unaltered course of its subsidiary access drive.  Onsite investigation showed a decrease in the total number of individual picnic areas, although seven of the present table units featured CCC-era fireplaces with inset iron grilles, all of which were repointed to some degree; three additional fireplaces in fair-to-ruinous states were also located in abandoned units removed from the access road.  The Ridge Picnic Area is now served by a public comfort station.  Using the 1930s map, the bed of the subsidiary access road for the Pinewoods Picnic Area was located opposite the former playfield, but has not been used for some time given the intrusion of plants and trees.  With the exception of a post-CCC directional sign noting the presence of table units, no other aspects of the picnic area—fireplaces, retaining wall, the comfort station, nor even an open area at the location of the former ‘council ring’—are readily apparent.

Although the area cleared and graded by the CCC for the playfield located at the northwest corner of the intersection of Fort Dupont and Fort Davis drives is evident, this play space has been given over to vegetable gardens, presumably tended by locals living nearby.  No evidence of Camp NP-7-DC survives; its site has been largely redeveloped as a parking lot serving the park’s maintenance garages.  Other more recent additions include a comfort station and picnic area straddling the original entrance located at the intersection of Minnesota and Massachusetts avenues, and an open amphitheater and multiuse park structure located to the north of Fort Dupont Drive near the park’s center.

Summary: The original CCC-era boundaries, principal park roads (including the spur connecting to Pennsylvania Avenue through Reservation 518), and a number of original park features, such as stone fireplaces in the picnic areas, at Fort Dupont Park survive intact from the time of the site’s creation.  Although it never achieved an intended status equivalent to Rock Creek Park, the park remains in active use, and is well served by its basic, largely CCC-created infrastructure.”

Project originally submitted by Brent McKee - wpatoday.org on May 24, 2013.