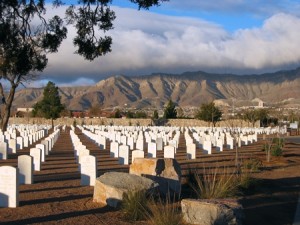 NPS.gov: “Labor hired for the cemetery and through the WPA constructed the national cemetery.  The New Deal labor program, begun in 1935, primarily completed small-scale new construction, rehabilitation, and/or landscape improvement projects that could be completed in a year or less.  In addition to the initial cemetery appropriations in excess of  $44,000, the cemetery received a  second $25,000 WPA project,  of which approximately $22,000 paid for labor and $3,000 for  supplies. … By October 1939, the request for appropriations resulted in another $75,000 allotment from the WPA for completion of a stone  wall, roads, and other work.

The initial flurry of construction at the cemetery accomplished a great deal.  WPA labor built the native rubble-stone wall that encloses the cemetery, which was completed on April 19, 1940.  Workers completed the flagstaff and base, which featured Texas Pink Granite, on September 28, 1939.”

Furthermore, the cemetery could not have been located where it is, had not the WPA funded the relocation of a polo field that had been at the location.

El Paso Herald-Post reported in 1939: “WPA will construct a wall around Ft. Bliss National Cemetery with the 525,000 that will be granted March 1, Ft. Bliss officials said today. The allocation will also pay for the construction of a caretaker’s house and grading- A total of 114 men will be employed on the project.”