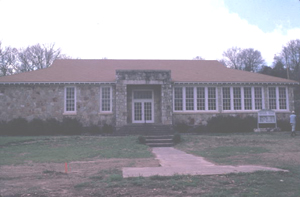 Photo appears to have been taken before the school became a church.

“”1939 will long be remembered in Everton and with much pride because it marks the completion of our beautiful new school building through the cooperation of the W.P.A., local school board and our entire citizenship…  This new structure was made possible by the united efforts of a public spirited citizenry and the unstinted cooperation of the federal government through its agency, the Works Progress Administration.  With the completion of this plant the Everton district is adequately equipped to take care of the youth within her present and extended borders…”

The first schoo1 in Everton was established around the turn of the century, and in 1903 a new school house was erected on a hill to the southwest of the Missouri & North Arkansas depot that was responsible for the community’s existence.  The original frame school house burned in the late 1910’s, and the brick building that replaced it served the community for almost two decades until ” [f]or numerous good reasons the brick school was razed in 1938″ and replaced by a new W.P.A. structure.  Much of the original building material from the 1920 school was utilized in the “most beautiful and modern” 1938 facility, constructed of “native ruble (sic) stone veneer.”

The new school’s dedication in April, 1939, was a major local event, including a country style banquet, a speech by the state’s W.P.A. Administrator, Floyd Sharp, and the reading of a poem penned especially for the occasion by Mrs. R. W. Milum:

“We dedicate this school today

The Everton School Building served as a high school for only seven years, and in 1959 the entire Everton School District consolidated with the Valley Springs School district, and the school building was sold to the Everton Methodist Church for $2,500.  It is currently used as a church building and sanctuary hall, and was recently remodeled in 1990.[1]

The Everton School, constructed during the period covered by the historic context The Evolution of the Public School System in the Arkansas Ozarks, 1920-1940, is a representative example of a small stone school building constructed for a rural school district.  Its documented construction by the W.P.A. and its use during this period as a local school building clearly identify it with this historic context and with this property type.  It is significant locally under Criterion A through its direct associations with both the history of the evolution of the public school system in the Ozark Mountain region of the state during this period and the W.P.A.”