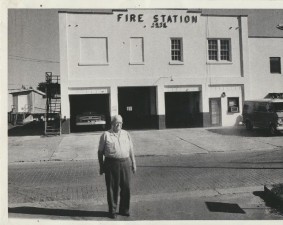 The accompanying photograph portrays the Winter Garden Fire Station at 127 Boyd Street, constructed by the WPA in 1938. Shown in the photograph is Hoyle Pounds. He was Fire Chief for over 40 years. The firetruck seen in the first bay now belongs to the Winter Garden Heritage Foundation.

As of 2013, the building is in the process of being repurposed as the new home of the Winter Garden Art Association under a three-year lease.

Hoyle Pounds was born in Ocoee, FL, in 1893 to John Richard “Bud” and Martha “Mattie” Carrol Pounds, who came from Doraville, GA. Hoyle went to local schools and then attended the University of Florida in 1910 to study Mechanical Engineering and played on the University football team. He began a small garage business in Ocoee in 1913 and became the first Ford tractor dealership in Florida. In 1914, he married Lucy New. They moved to Winter Garden in 1920 and Hoyle began a partnership with J.D. McMillan. They owned and operated an authorized Ford dealership selling cars and tractors. He bought out McMillan in 1921. He had the idea of putting rubber tires on tractors and received a U.S. Patent in 1928. He also served as the Winter Garden Volunteer Fire Chief for 42 years. Pounds died in 1981, at the age of 87.