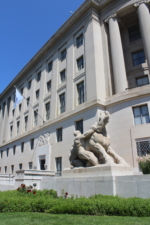 The Federal Trade Commission (FTC) was created by Congress in 1914 and the FTC occupied various sites in the District of Columbia during its early years. It finally got a permanent home in 1937-38 under the New Deal, with funding from the Public Works Administration (PWA) and Public Buildings Branch of the Treasury Department.

The FTC building stands at the eastern apex of the Federal Triangle, at the intersection of Pennsylvania and Constitution Avenues, and was originally known as the Apex Building.  The New Deal completed several buildings in the Federal Triangle that had been started in the early 1930s, but the FTC headquarters is the only one built entirely during the New Deal period.

The Public Buildings Act of 1926 authorized the Federal Triangle project, a large-scale initiative to develop a 70-acre site between the White House and the U.S. Capitol.  It was done on the initiative of the 1901 McMillan Plan for the District, which called for Neoclassical style buildings in the manner of the City Beautiful movement of the turn of the 20th century (itself based heavily on Beaux Arts concepts from Paris).

Edward H. Bennett of the famous Chicago firm, Bennett, Parsons and Frost, oversaw the FTC project and designed the FTC building in Neoclassical style. The structure has one entrance on 7th Street and two each on Pennsylvania and Constitution Avenues.  It was one of the first federal buildings in Washington to have air-conditioning and a basement parking garage.

“The seven-story building sits on a simple base of Mount Airy granite. The walls above are clad in large, smooth blocks of Indiana limestone laid in a regular pattern. Bays on the midsection of each elevation are divided by pilasters (attached columns) or colonnades that form a loggia (open-air, arcaded space). The seventh story is slightly recessed. The portico is supported by Ionic columns. Aluminum window and door grilles accent the exterior. The low hipped roof is covered with red terra-cotta tiles.” (GSA)

The building includes several works of art. Two bas-relief medallions with eagles by Sidney Waugh are located on the northwest corner elevation. Images on the large aluminum entrance grilles on Constitution Avenue, designed by William McVey, portray commercial transportation methods.  Above the grilles are rectangular panels that represent foreign trade, agriculture, shipping, and industry, each executed by a different artist.

Two allegorical sculptural groups by Michael Lantz, called Man Controlling Trade, are located at the east end of the FTC building.  In each, a muscular man holds a rearing stallion, symbolizing the force of trade and the government’s role in regulating it.

The FTC Building was included in the Pennsylvania Avenue Historic Site in 1966 and was subsequently listed in the National Register of Historic Places. 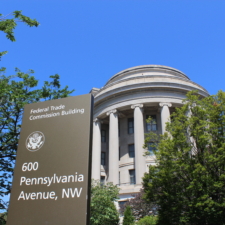 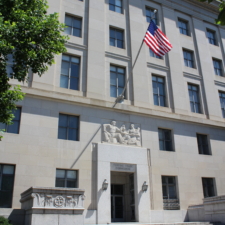 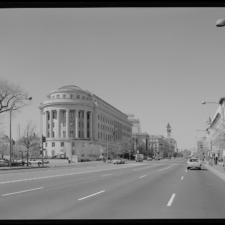 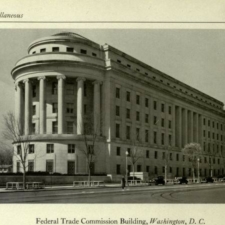 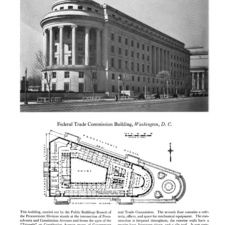 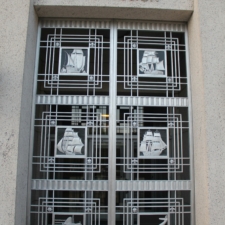