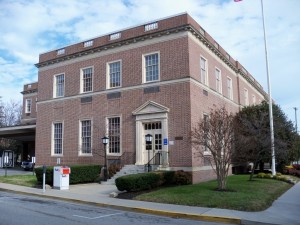 The Salisbury Post Office, on the Eastern Shore of Maryland, was originally built in the 1920s.  The U.S. Treasury commissioned an expansion of the building circa 1936 “which included a second floor and…an additional two bays on each end of the original five-bay building” (from a Maryland Historical Trust report).

The Treasury Section of Painting and Sculpture also commissioned artist Jacob Getlar Smith to paint three murals for the building circa 1939. “These three murals were commissioned by the U.S. Treasury Section of Painting and Sculpture at the suggestion of the Wicomico County Historical Society.  The artist took his subject matter largely from historical photographs supplied by the Society, thus depicting scenes and modes of living in Salisbury in the early 19th century in an idealized manner” (from an information plaque in the post office).

One of three in the building.