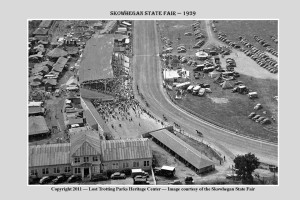 During the Great Depression, various public works projects were initiated in town, including the construction of a grandstand for the racetrack. According to the Independent Reporter, “The Grandstand project which includes the construction of a ticket office and other improvements calls for four carpenters and two laborers. The amount appropriated in ERA funds is $891”

A later article reports “The carpenter-foreman at the Fairgrounds is Ralph Buxton. At the time a crew is engaged in building a ticket office as part of the new grandstand equipment.
“The Grandstand, built in 1935, replaced the previous grand stand that succumbed to fire in 1934. This structure was renovated in the early 1990’s. Constitution Hall had also been recently upgraded. Arson was the cause and a suspect turned himself in and then was charged shortly after the blaze was reported. The State Fire Marshal’s Office was on the scene investigating.”