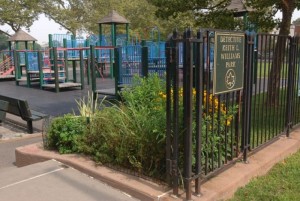 Formerly known as Liberty Park, this site was acquired by the City in late 1936. In July 1937, Parks announced that “the new playground…is the first section of a large recreational area which is being constructed to be completed. It is for small children and has slides, swings, see-saws, sand tables, play houses and a rectangular wading pool which can be used for volleyball when not in use as a pool. Benches and shade trees are also provided. When the entire area is completed, it will have facilities for baseball, football, tennis, roller-skating, basketball, horseshoe pitching and paddle tennis, as well as a four lap, mile running track.”

On October 15, 1937, Parks announced the completion of this work: “The new Liberty Avenue Playground has a football field, baseball diamonds, tennis courts, roller skating track, and a quarter-mile running track. A fully equipped playground for small children is also part of the development. The entire perimeter is landscaped with shade trees and grass plots, with permanent benches installed under the shade trees. The Mayor and the Park Commissioner will open this area at 8 o’clock and entertainment will be furnished by the boys’ band of the Church of St. Catherine of Sienna and singing and dancing acts of the playground children.”

Today the park contains many of these facilities.

Although the 1937 press release does not mention the WPA or other New Deal agencies, researcher Frank da Cruz explains here that almost all New York City Parks Department projects between 1934 and 1943 were carried out with New Deal funds and/or labor, and that after April 1935, the WPA quickly became the main source of this support.