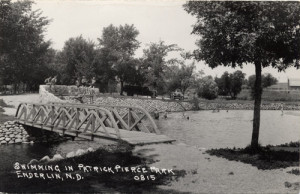 This article was found in the January 14, 1937 issue of The Enderlin Independent. It is reprinted here exactly as it appeared in that paper.
************
WORK ON DAM IN PATRICK PIERCE PARK UNDER WAY
————————-
Rubble-Masonry Dam Will Have Fifty-foot Spillway
———
Work on the new dam across the Maple River in Patrick Pierce Park started this week, according to city engineer, Clifford T. McBride, in charge of the work. The plans call for a rubble-masonry overflow dam with an over-all length of 92 feet and a fifty-foot spillway. A house has been erected over the site to protect the men from the severe winter weather and to keep the concrete from freezing.
Thirty men are employed on the project at the present time but commencing next week the work will be divided in two 5-hour shifts.
On account of the comparatively mild weather throughout December other work in the park has been progressing more rapidly than usual. The swimming pool has been deepened and enlarged below the bridge and the west bank riprapped, and a walk built on the west side of the river to the new dam will greatly add to the attractiveness of the park. A considerable amount of work has also been done in the way of clearing out the river bed above the upper pool dam.
Provision is also being made for additional parking space south of the new dam.