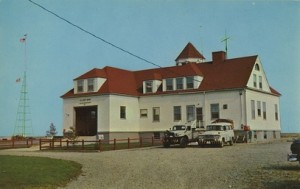 A 1938 Hampton Union article reported that: “The new Hampton Beach Coast Guard station will be the most elaborate and up to date of any in this section.

The large two and one half story building will be located in a triangle between Dover and Exeter avenues at White Island, instead of at the point near the jetty. A four-door garage will be located at the foot of Dover avenue next to an equipment building. There will be another entrance to the station from Exeter avenue.

Two recreation rooms are planned for the first floor of the station, in an ell at each end. In the tower, built from the center of the house, there will be a radio telephone and the local telephone system. The building will be heated by oil and an electric range will be installed in the kitchen.

The plans for the basement show a laundry, provision room, room for storm clothes, boiler room, a drill room the full length of the main building, a workshop in one ell and a storage room in the other. On the first floor there will be an office to the left of the entrance and the mess room on the right.

On the second floor there are four large bedrooms, each with 4 lockers, to accommodate 16 men. There are also showers with the bathroom and a porch deck. The well-equipped ordinance locker will include rifles, pistols, bayonets and ammunition.

The bathhouse measuring 62′ x 46′ will have a 130 foot launchway with three tracks for the marine railway. The sum of $147,750 has been appropriated as a PWA project for the construction of both the station and the bathhouse.”

The North Beach Station was demolished by a controlled burn in 1973.