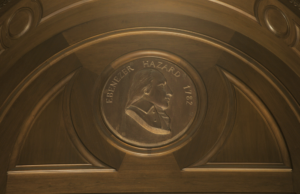 Gleb Derujinksy was commissioned by the New Deal’s Treasury Section of Fine Arts to create eight sculptures of previous Postmasters General. The sculptures were made out of wood, and Derujinsky was paid $2,800 for the job. When this artwork was created, the present-day Clinton Federal Building was the headquarters of the U.S. Post Office Department.