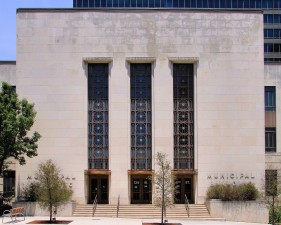 On September 30, 1937, the City of Austin accepted a grant from the Public Works Administration not to exceed $112,500 to aid in the construction of a city hall and central fire station. The new city hall was a renovation of the existing 1906 city hall with new extensions added. The architectural firm of Page and Southerland designed the new building in the Art Moderne style. The city let the general contract for construction to the Schwarzer-Barron Company on November 22, 1937 for a bid of $145,594. The city council held its first meeting in the building on November 23, 1938. The total cost of the project was $230,000 including construction, equipment and furnishings.

The city built a new city hall in 2004 at a different location. The 1938 city hall still houses some city departments and services.

Project originally submitted by Larry Moore on May 25, 2014.