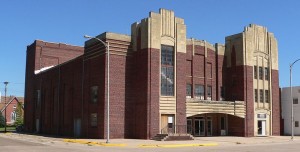 The historic former City Hall and Auditorium building in Superior, Nebraska was constructed between June 1936 and February 1937 with the assistance of federal Public Works Administration (PWA) funds. The building, which, as of 2012, was awaiting renovation, is located at southeast corner of 5th Street and Commercial Avenue.

Project originally submitted by Evan Kalish on May 3, 2015.