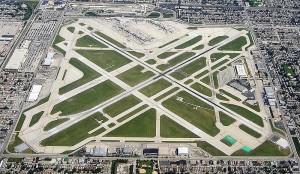 Before Midway Airport was called Midway it was known as the Municipal Airport. However, in the 1930s, under the watchful eye of the WPA (Works Progress Association), the airport went under construction to expand and add new runways for safer travel. It also during this time held the top spot for the most traveled airport in the world. To this day it is the third busiest airport and continues to use the ideas and expansions made from the New Deal.

In the 1930s there many airports that were going under construction as part of the New Deal programs, such as the WPA, and the Municipal Airport of Chicago was one of them. In 1935 there was a proposal for the WPA to give funding for the expansion of this airport. The expansion included making the airport a safe landing zone for all weather conditions. In order to do this they needed to add radio beams and marker signals on the ground and used as lights. The other large project that was put into play was the widening of the runways, also called taxing strips. The plan was to expand them 200 feet wider and was to be the first jobs to be executed. The runways would also be lined with 200 watt light bulbs. Finally, drainage systems would be added as well.

This WPA project was approved by Harry Hopkins and employed any able bodied men who were willing to work and could withstand manual and strenuous labor. At first, 50 people were employed with the hope to gain at least 250 more people in the following days. Then after six weeks 1200 men were to be employed. These plans were put into action on December 20, 1935.

There were a couple of struggles however, and one very large one was the granting of money from Harry Hopkins and the WPA. Mayor Kelley asked for $8,577,000 for the entire expansion project. However, WPA was hesitant to give the money because the project was not maximizing jobs while using the least amount of materials, which was the purpose of the WPA. September 11, 1935, Robert J Dunham (an administrator of the WPA) announced the airport would be gaining the financial support from the WPA, however it was later discovered that Dunham was the reason the project was delayed until December 20, 1935. Dunham believed it was not a good expense for the city because it was a long time project that would only give a few jobs for a long period of time. He instead wanted smaller jobs that would be done quicker but employing more people in a short period of time. However, it finally did get the grant and started within the year. The airport project was delayed one more time again when a strike broke out among the morning and afternoon workers on February 26, 1938. The strike ended with the WPA raising the wages and creating fairer hours for them men. The strikes were said to be blamed on “outside rebel forces.”

The final step for the airport was to get the railroad tracks to be rerouted. The city had to buy up the land in which the railroads were occupying and then continue to move the tracks over so the airport could be finished. The airport project had already been granted another $1,883,994 to finish airport on June 30, 1938, but was being halted by this railroad problem. Negotiations were set in motion and September 7, 1938 was supposed to be the start date. However, the terms for the movement of the tracks were not agreed upon until February 13, 1939. The work was soon finished after that allowing the Municipal Airport of Chicago, known as Midway Airport today, to become one of the busiest airports around the world.