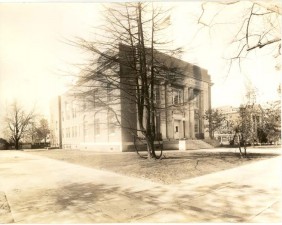 Formerly known as the Aiken Federal Court House, this PWA structure exemplifies the Georgian Revival style popular in the South in the 1920s and ’30s. The National Register describes the building’s history: “Constructed in 1935, the steel-framed building has housed the federal courts and federal agencies since its completion. It is among the most notable buildings constructed in Aiken in the 1930s, and retains must of its historic integrity and design character. The building also contains a ca. 1938 mural titled “Justice as Protector and Avenger” commissioned under the Section of Painting and Sculpture of the U.S. Treasury Department that reflects a growing movement of Social Realism found in American art during the Depression Era. The mural, by Stefan Hirsch, is located behind the judge’s bench and depicts a lady justice as a simply clothed figure in red, white, and blue, alternately protecting the oppressed while prosecuting the evil elements in society.”   (https://www.sciway.net)

It was almost closed in 2012 for federal cost-cutting.