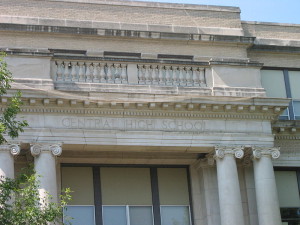 Downtown Grand Forks, North Dakota’s historic Central High School building received an auditorium constructed with the assistance of the federal Works Progress Administration (WPA) during the 1930s. The building has since been expanded with further additions.

Federal Writers’ Project:
“CENTRAL HIGH SCHOOL, 1st and 2nd Aves. N. between 4th and 5th Sts., has an auditorium unit constructed entirely without windows. It was the first public building in North Dakota to utilize indirect lighting throughout. It was erected in 1936-37 with WPA assistance at a cost of $275,000, and includes a pipe organ, the gift of the Grand Forks Music Association.”