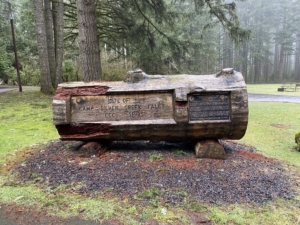 The first company of CCC enrollees to arrive included 215 young men, mostly from Illinois. The Oregonian reported that their quarters were completed at a cost of $10,000. Later enrollees arrived from Tennessee.

As acknowledged on the plaque marking the site: ” The young men of Camp Silver Creek Falls constructed trails, roads, bridges, buildings and planted thousands of trees. The South Falls Lodge stands today as a testament to the craftsmanship of their work. They also built Camp Silver Creek and Camp Smith Creek, two Recreations Demonstration Areas that became boys and girls summer camps. Camp Silver Creek is still in use today by the Salem YMCA and is now listed on the National Register of Historic Places along with South Falls Day Use Area.” 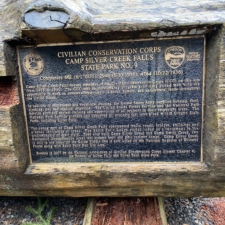