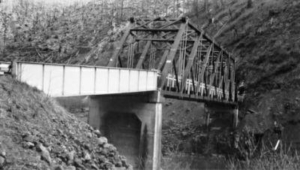 Civilian Conservation Corps (CCC) enrollees from Camp Nehalem were charged with constructing a truck trail, or fire road, along the lower Nehalem River to create greater access to the forested land in that part of Tillamook County. One of the first requirements involved building a bridge to cross the Nehalem River just north of their camp.

Construction of the bridge near Camp Nehalem drew attention since it was judged to be one of the largest bridges in the northwest built as a CCC project. The Oregon Journal reported: “. . . the boys cut the trees, hewed the timbers, mixed and ‘applied’ the concrete; piped gas across the river to operate the ‘cats’ and compressors; they manage a one-hoist skagit; in blasting one shot throws out 1500 yards of solid rock.” The newspaper further praised the project by saying that “these 20 bridge lads are not just working . . . They are learning bridge building.”

Tillamook County provided the materials and members of CCC Company #2908 provided the labor for the wooden “Howe through truss” bridge. In 1980, the wooden CCC Bridge was replaced. 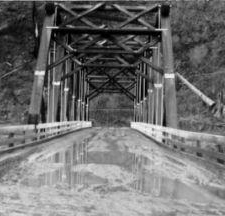