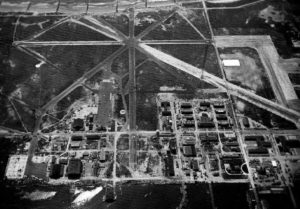 WWII-era photo from the National Archives

The WPA conducted a large-scale reconstruction project at the Cape May Naval Air Station, located at the easternmost part of Cape May. A thorough history of the installation can be found at Abandoned & Little Known Airfields (airfields-freeman.com). There are few traces of the New Deal- and WWII-era installation remaining, though an abandoned runway is still visible. The facility is now the U.S. Coast Guard Training Center.

Cape May County Gazette wrote in 1936:
“One of the finest WPA projects granted this section is the rebuilding of the U.S. naval Air Station at Cape May, on which work has already been started. The $130,000 project is of more than usual importance for a number of reasons. The field, in its present condition, is hazardous to airmen. Its reconstruction will give work to 300 unemployed men from every part of the county. The completed job will cost neither the City of Cape May nor the county a penny.”

According to a DoD Heritage Assessment, WPA projects at the old Naval Air Station included: