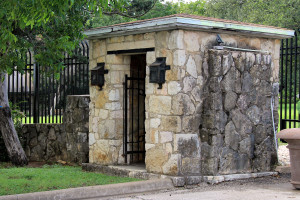 Camp Mabry, named after Brigadier General Woodford H. Mabry, the Adjutant General of Texas from January 23, 1891 to May 4, 1898, is the headquarters of the Texas Military Forces. The original 90 acres was donated to the State of Texas in 1892. The first construction at the camp included a mess shed and a parade grandstand. By 1911, Camp Mabry had expanded to more than 385 acres. During World War I the United States Army used the camp as a training site and built several barracks and administration buildings.

Works Progress Administration (WPA) projects under the sponsorship of the Adjutant General’s Department of Texas formed the second major phase of construction at Camp Mabry from 1935 to 1943. The first WPA project approved for Camp Mabry consisted of necessary repairs and “other improvements to generally restore the useful value” of 15 buildings. Additionally, the WPA built structures of native limestone that included rustic walls, entrance gates and guard post, a dam, arched bridges, drainage ditches, a flagpole base, cannon bases, workshops, warehouses and storage buildings (dating from 1936 to 1942). Minor infrastructure features include limestone culverts, headwalls, and limestone or concrete sidewalks, some of which the WPA installed between 1936 and 1943. They constructed roads and cleared, leveled, sodded, and drained the camp.