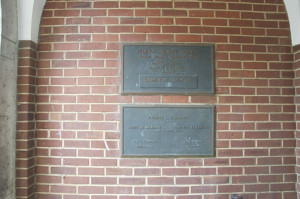 The Public Works Administration (PWA) provide funding for the construction of Cameron Middle School in South Nashville, an historically African American school in what was then a fully segregated city.  It was one of many PWA grants for Black schools and colleges around the country, including Pearl High School and Tennessee A & I College in Nashville.  Cameron later became a high school.

“Located at 1034 First Avenue South, the school was constructed with PWA funding support in 1939-40 and is important for its local significance in African-American social history. Cameron played a central community role for South Nashville’s African-American population. The original school building is a Late Gothic Revival design by Nashville architect Henry C. Hibbs. McKissack and McKissack designed a large 1954 addition that accompanied the school’s transition to a high school curriculum”   (http://www.nashville.gov)

The school is listed as an Individual Historic Landmark.