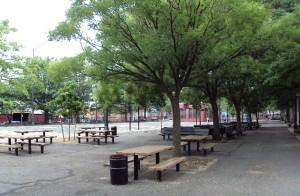 In November 1942, the Department of Parks announced that the WPA had completed the first part of the construction of a new playground at the last site mentioned above. The press release explained that Parks had received the land in 1940, with some restrictions for the nearby subways, and that: “The development of the smaller triangle between Eastern Parkway and Sackman Street now open to the public, includes retaining walls and a stairway entrance; a sitting area with a memorial flagpole, a roller skating track; a comfort station; a sand pit, wading pool and several pieces of kindergarten play apparatus.” The larger triangle east of Sackman St. was not yet completed.

In March 1943, Parks announced that work on the larger triangle had been 80% completed with “two basketball, six shuffleboard, three paddle tennis, three handball, two bocci, and four horseshoe courts, and a sitting area near the subway entrance. A large central open play area will serve for roller skating and softball.” However, the WPA had recently been disbanded, and the release thus announced the opening of bids to contractors for the remainder of the work.

The playground is still in active use and was further renovated in the 2000s.