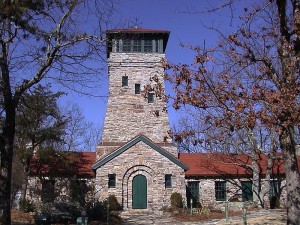 Constructed by the CCC.

“Bunker Tower is an observation tower on the peak of Cheaha Mountain in Cheaha State Park located in Cleburne County, Alabama, U.S.A. The tower is located at the peak of Cheaha Mountain, the highest point in Alabama.[1] The tower is a large stone building completed in the 1930s by the Civilian Conservation Corps.[2] It originally had park offices and a gift shop in the wings on either side of the observation tower.

The tower is immediately adjacent to the very tall Alabama Public Television WCIQ transmitter tower which aids it being a central meeting place that can be easily found despite the trees and foliage at the top of Mount Cheaha. It was added to the Alabama Register of Landmarks and Heritage on December 15, 1989.”

“The highest point is marked with a USGS marker (photo below) in front of Bunker Tower, a stone Civilian Conservation Corps building with an observation deck on top. The CCC also constructed a road to Cheaha, but the road has been closed for years. The old road is locally referred to as the “CC Road” and contains interesting, inaccessible ruins.”

The CCC built a road, excavated for a lake with campground, developed hiking & horse trails, constructed 11 rustic cabins, a comfort station, a bathhouse, built the Cheaha Lodge & Bunker Tower, and conducted landscaping. The white CCC Company 468 SP-2 worked on the park until 1936; thereafter work was continued by Company 2420C SP-7, which was comprised of African American veterans of World War I.