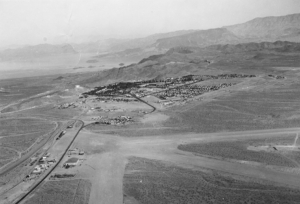 Originally built to accommodate travel to Hoover Dam while under construction

“To accommodate the dramatic increase in motorists, the highway between Las Vegas and Kingman, Arizona, was kept open year-round by 1936. Visitors came to southern Nevada by car, rail, and plane. The CCC helped extend and surface new runways at Bullock’s Field in Boulder City. For several years, the Grand Canyon Airlines and Trans World Airlines scheduled regular stops in Boulder City for its planes on the Newark, New Jersey, and Los Angeles, California, route.”

The former Bullocks Fiel is largely no longer extant, with a hangar—located at 1401 Madrone St.— being the only major building still standing. There are also a few slabs of concrete runway remaining.