"Water rushing downstream from two gates of three that were open."

"The Buchanan Dam is a large flood-control, water-conservation, and power project. It was originally a power project of a utility company but was taken over by the Lower Colorado River Authority in 1936 after the utility company had abandoned it. The total length of the dam is 8,400 feet and its height is 143 feet from bed to parapet. It develops a reservoir of 23,500 acres.

The Austin Dam project consists of the rebuilding and restoration of a dam originally constructed in 1893 which had been partly destroyed by floods and eventually abandoned. The construction consists of a curtain wall on the upstream side of the dam to prevent percolation of water under it, to increase the mass of the dam by adding concrete to the old stone dam, to repair the foundation of the toe of the dam, and to construct and equip a new powerhouse. The project will probably be completed in December 1940 at an estimated construction cost of $3,166,032 and a project cost of $3,415,069."
(Short and Brown)

"Construction of the then-named George W. Hamilton Dam was started in 1931 by a company controlled by Samuel Insull, but soon ended with the dam less than half completed when his highly-leveraged public utility holding company collapsed during the Great Depression.[2] In 1934, the Texas legislature authorized the formation of the Lower Colorado River Authority to complete the Hamilton dam.[3] Following completion in 1937, the dam was re-named for U.S. Representative James P. Buchanan, who was involved obtaining federal funding the project from the Public Works Administration."
(Wikipedia) 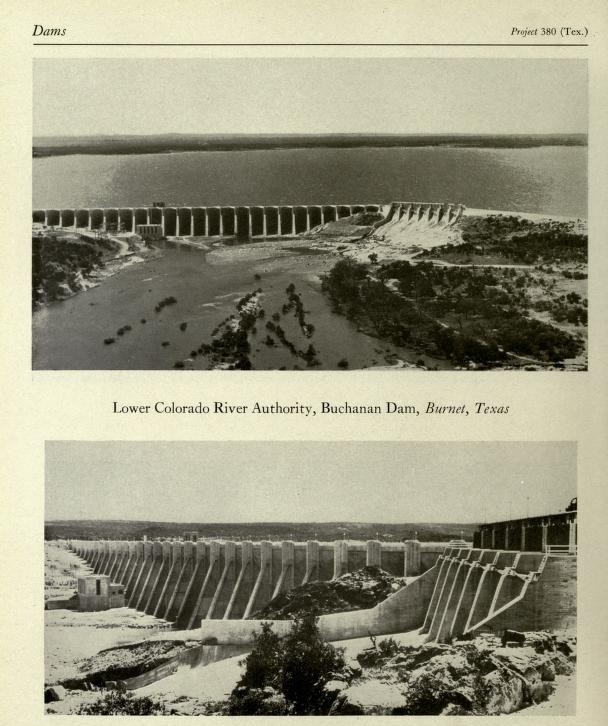