The Civilian Conservation Corps built the Bridgton CCC Camp Co. 1124 in Bridgton ME.

On June 1st, 1935, Lt. J. L. Fearer arrived in Bridgton with a cadre of 23 men from the Rangeley Camp No. 2107, and Bridgton Camp No. 11005 was officially begun. For a time the Cadre was quartered in the “Exposition Building” of the Bridgton Agricultural Association. The members of the cadre worked diligently, and under Lt. Fearer’ s direction civilian carpenters rushed the construction of the buildings. Lt. F. R. Blaisdell, Jr. was assigned to the Company on June 23, 1935. The members of the Technical Service, headed by Supt. Leon P. Brooks, arrived in camp on July 30, 1935. On this date also the last of the buildings was completed and the remainder of the Company was brought in. Busy days followed. The enrollees worked willingly after hours and on Saturdays. Walks and roads were improved and borders of evergreens were set out along them. Granite was procured and walks were completed. Grading and landscaping were done. Volley ball and basketball courts were laid out. A baseball diamond was improved. A building was loaned for use as a school house. This was painted and remodeled and a dark room was constructed in it.

It is interesting to note that the camp is located on the old Bridgton Fair Grounds. We boast of being one of the only camps in the Corps Area to have a grandstand. During warm weather this is used for Company sings. In September, 1935, 1124th Co. was chosen to represent the First CCC District in the Corps Area competition for best camp. 1124th Co. placed third in this contest. Again, in March, 1936, 1124th Co. was awarded the Honor Camp banner for the First CCC District and represented the District in the Corps Area competition. During May and June an extensive system of flower beds was laid out around camp. Members of the personnel and townspeople generously contributed bulbs and seedlings. During July and August these flower beds were very colorful and added much to the appearance of the camp. On October 8, 1936 Lt. Fearer was transferred to the Tamworth, N. H. Camp; and Capt. Francis L. Ralls was transferred here from Bar Harbor to command the Company. Under the direction of Capt. Ralls the development of the camp has continued. Buildings have 1124th COMPANY been repainted and redecorated. New furniture and chairs have been built. The camp has been very fortunate in having had among its members two men of artistic ability. These men have done a great deal to beautify the interiors of the company buildings. The company Recreation Hall is lined with murals depicting scenes of camp work. At present, an example of each man’s work is on display in Corps Area Headquarters. These are: a mural by Victor Linnell showing men of 1124th Co. at work on a trail; and a landscape scene painted on a fungus growth by Benoit. Bridgton is the center of a large summer recreational area. Lakes and ponds in and around the town are studded with hotels and camps.

The major project of the camp in the winter has been, therefore, the extermination of Gypsy moths on lake shores and in the towns of the vicinity. Some of the best stands of White Pine in Maine are located within easy driving distance of the camp. It is quite fitting, therefore, that the major summer project should deal with the eradication of the chief enemy of the White Pine, i. e. Blister Rust. From Early May until September crews from camp are busy destroying the Rives which spread the disease. A great deal in the way community education has been accomplished by the work of crews from camp thru the Forest Stand Improvement work which has been done in the timber lots of “Town Farms” of nearby towns. The completed job gives a clear illustration of what should be done in all stands of timber. The camp has been very fortunate in having a number of ideal lunch ground sites located within easy working distance of camp. To date five of these have been constructed, and are being enthusiastically used by visitors and residents alike. The most rustic is located at Willis Brook, Bridgton. The shelters on this lunch ground are roofed with hand hewn shingles. In connection with developing the recreational possibilities of the surrounding country, the camp has spent considerable time in the construction and improvement of mountain trails. The most interesting one is of Mount Pleasant. Here three log foot-bridges have been constructed to carry the winding trail across a mountain stream. Also, a ski trail was constructed on Pleasant Mountain. This trail, thirty feet wide and nearly a mile and a half long, is reputed to be one of the most difficult in the country. During the flood conditions in the spring of 1936 the Saco River washed out great quantities of corn stalks and stubble which had been ploughed under the preceeding fall. A project was approved for this camp to spend 250 man days gathering and burning this waste to prevent the spread of the corn borer in the town of Fryeburg. Since there are three corn canning factories in Fryeburg, the importance of this work can readily be seen. All the towns within a 25 mile radius of camp have been type mapped, so that the timber resources of this area can be seen at a glance.”

In addition, according to the Camp articles in the local Bridgton News, in 1936 CCC crews scouted “for signs of the Dutch Elm Disease have worked in the villages of Waterford, Lovell, Fryeburg, Hiram, Brownfield, Baldwin, Cornish, and Standish.” “Constructing a lunch ground at the old stone watering trough on [US 302] about five miles south of Bridgton, on the property of Miss Lena Willis. The lunch ground will consist of two shelters, seats and tables, for twenty people, two stone fire places, drinking water and toilets.” [Likely dismantled, can’t be found] “Foreman Laurant Pingree and his crew completed the lunch ground which was begun last fail on the bank of the Saco River, near the Fryeburg Town Farm. The area there contains a parking space large enough to accommodate several trailers.”

The Flood of 1936
During the winter of 1935-1936, there was a tremendous amount of snow. Under normal conditions, the snow would have melted gradually during the spring, aided by light rains, and cause no serious problems. But on March 11, 1936 for three days it started to rain across the state, and a steady, heavy rain continued for three days. By March 13 (Friday, the 13th incidentaly), overflowing streams swelled the larger rivers of central and western Maine, raising the levels to record heights and sending millions of tons of ice downstream towards cities and towns.

A week later, Governor Louis J. Brann estimated that $25,000,000 in damage had been caused by the flood, and that the total would rise. Five people were dead; 10,000 Mainers were homeless; eight large bridges were destroyed; direct railroad routes were out; hydro-electric-plants were shut down; sixteen communities were partially or wholly isolated; thousands of people were out of work because of damage to industrial factories; and millions of feet of pulpwood and timber lined the flood route.
Many of the C.C.C. Camps throughout Maine were involved in flood related work in the aftermath of the flood of 1936. A leader at the Bridgton Camp (1124th Co.), Norman A. Wetherington of Readfield had the opportunity to recall his experience with the flood;
“The afternoon of Friday the 13th, Lt. Fearer, Commanding officer of the 1124th Co., received a call for help from the town of Bridgton. He drove down to the edge of town to view the situation. He took one look and went back to camp immediately. Inside of a half hour he had the entire camp personnel loaded into trucks (seven forestry trucks and two Army trucks) headed for Bridgton. The little army consisted of two officers, all forestry supervisors, office personnel, and the entire roster of C.C.C. Boys, except for three cooks that were left in camp to make sandwiches.

“There is a small stream that flows out of Highland Lake, skirts the Bridgton business district and continues on to Wood Pond. When we arrived on the scene, the stream was a raging torrent and just barely out of its banks. Lt. Fearer ordered all the trucks to start hauling sand from a nearby pit. The trucks had to be loaded by hand and off-loaded into bags by hand. I don’t remember where the bags came from. Many local men pitched in and helped with the sandbagging operation. Hot coffee also appeared from somewhere.
“We were never issued raincoats, so all we had were our heavy wool Army overcoats to protect us from the elements. After a half hour they were soaked through and weighed a ton.

“About midnight the ice in the stream began breaking up, which created another problem. A truck was sent back to camp with a couple of men to get every pick, bar and anything that could be used for a pick-pole. Some of the ice chunks were from two to three feet thick, so they had to be kept moving as a jam would undo all the good the sandbags were doing.

“ The steady rain combined with the snow melt from the surrounding hills upstream caused a continuous rise in the water level. That meant the sandbags had to be piled higher and higher.

“During the night, sandwiches came down from the camp and local people furnished coffee for everyone. As there was no place everyone could get under cover we had to take our break in the rain.

“Everyone from camp worked Friday afternoon until Saturday evening trying to save the upper Main St. business section from major damage. It was impossible not to have a few leaks in the sandbag dikes, but water that did get through did only minor damage.

“Early Saturday morning Lt. Fearer received word that his camp was flooded. He refused to leave the town of Bridgton to fend for itself. As the camp was on high, flat ground and all the buildings except the garages were well above ground, he doubted that much damage would occur.

“The stream crested early Saturday before noon, and by afternoon it had receeded enough to show the danger had passed. About suppertime everyone in the 1124th Co. returned to their camp; wet, very tired and much in need of sleep.

“After a day’s rest, several truck loads of Bridgton Boys were sent to assist towns hard hit by the rampaging Saco River. Personnel from the Alfred C.C.C. Camp had been on flood duty for several days, moving up and down the river, helping whenever they could. The Bridgton Boys joined them to fight the ravages of the flood. From March 11th to the 21st, it rained every day but three days in the middle of that period. Several small streams that originate in the White mountains are the tributaries fo the Saco River. With the amount of snow in the mountains that was melting, it seemed doubtful if the Saco River would ever subside. It finally began doing just that about the 22nd. When the river receeded back into its banks, all the C.C.C. Boys returned to their respective camps.” 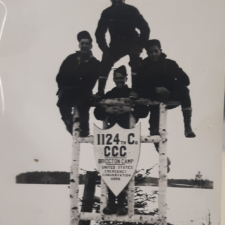 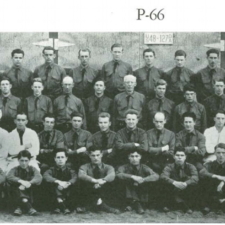 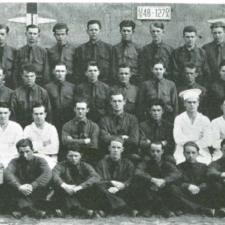 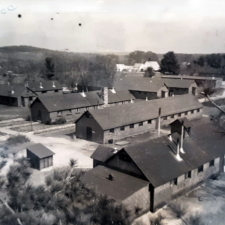