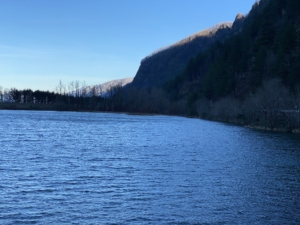 In 1933, the City of Portland gave permission to the federal government to establish a Civilian Conservation Camp (CCC) in its Columbia River Gorge Park. What had been Benson Park became CCC Camp Benson. Between 1933 and 1935, CCC enrollees groomed the surrounding parkland, creating the New Benson Park.

Today, the lowland, timbered park serves as a day use picnic area with swimming and fishing in the park’s Benson Lake. It also serves as the western anchor to a system of trails connecting Multnomah Falls to the east and Wahkeena Falls to the south.

The work of the CCC established these amenities for the public’s use. The enrollees groomed the landscape, opening up vistas to the river as well as contributing to fire prevention. Trails that they constructed between the New Benson Park and Multnomah Falls offered hiking along the lake as well as up the bluff to the top of Multnomah Falls and then looping down to a series of falls to the west. Managing the water flowing from the basalt bluffs above the park, the CCC workers refined the existing lagoon to create Benson Lake. As one enthusiastic reporter also noted in the Portland evening newspaper: “Much clearing between the Columbia highway and the river also is being done to make picnic spots. A circulating road is being laid out and picnic grounds cleared below the highway.” A water system they laid enhanced the picnickers’ experience.

Lumberman Simon Benson donated the land to the City of Portland for a park in 1915. Significant development, however, began during the CCC enrollee’s deployment there. In 1939, the City of Portland deeded New Benson Park to the US Forest Service and later it became the responsibility of the Oregon State Park Service. Although less well-known than Multnomah Falls, a mile to the east, Benson State Park anchors an impressive mile-long recreation area along the Columbia River. 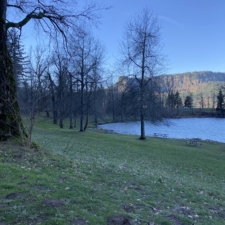